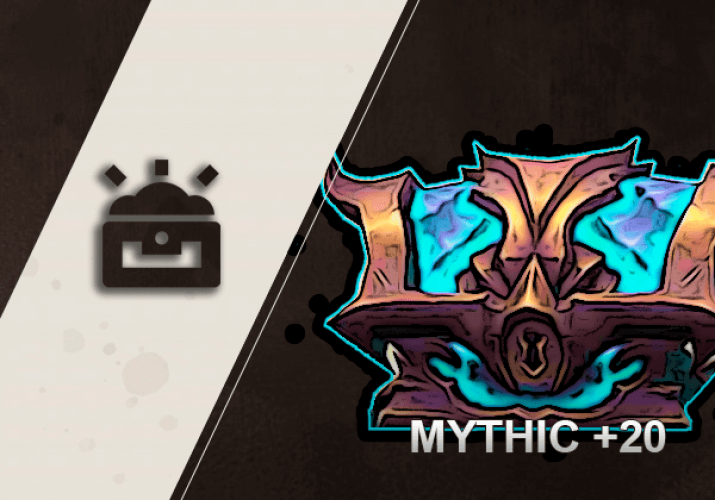 Mythic+ Keys is one of the most interesting and varied contents of the WoW game. The system allows players to compete against a timer in Challenge Modes and rewards vary depending on the level of the passed key up to 262 iLvl in the dungeon chest and 278 iLvl of weekly chest. Shadowlands Season 3 brings many Mythic+ changes, including two new Tazavesh Mythic+ dungeons, as well as a new seasonal affix Encrypted!

Mythic+20 is one of the best way to up your Mythic+ score progress. Own Mythic+ Score system, similar to the Raider.IO Score for Mythic+! Now the game itself has a viewing tool to view your Mythic+ Score progress. Each season there is a battle for the first places in the leaderboard.
The ilvl of the character does not mean much compared to the experience of the game. It is the rating of your Mythic+ score that is the indicator of your skill in passing mythic+ dungeons.

Timed Run - rewards you Keystone Hero Achievement and a portal to that dungeon!

Buy a Mythic+20 boost weekly or timed run to get the ability to teleport to the completed dungeon and a huge amount of M+ score points.

Additional rewards or progress in:

What does the timer mean in Mythic+20 runs:

Once the key is activated, a timer starts and your goal is to defeat all the bosses in the dungeon, as well as a certain amount of trash before the Mythic+ timer expires. Only the Mythic Keystone that was activated will be updated depending on how long you complete the dungeon. The keys of the rest of the players in the group will not change.

What is the Blizzard's Mythic+ Score:

How does Mythic+ loot system work:

Advantages in Mythic+20 Boost on Smartboost:

How to get Mythic+ dungeon runs:

For any additional information, please, contact our manager via live chat!